Aragonite gem of the World Heritage

Ochtinská Aragonite Cave represents a unique natural phenomenon drawing attention by the richness and variety of aragonite fill, as well as an interesting evolution and development of cave spaces. 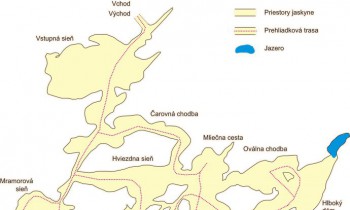 The artificial tunnel into the cave is 144 m long and overcomes the vertical distance of 19 metres with 104 steps. The total length of the show path in cave is 300 m, air temperature reaches 7,2º to 7,8ºC. Cave visit lasts 30 minutes. The ceiling is decorated by exceptional forms of eccentric aragonite. There are not many show caves in the world with such a specific decoration.

It is located in the Ochtiná cryptokarst on the north-western slope of the Hrádok Hill in the Revúcka Highland between Jelšava and Štítnik. Entrance adit leads to the cave at elevation of 642 m.

The cave is located in the Slovenské Rudohorie Mts. to the west of Rožňava. You can reach the cave by a turn from the state road between Štítnik and Jelšava on the Hrádok Hill (2 km). The parking is 300 m in front of the cave. Visitors walk from there to the cave entrance building.

It is formed in a lens of Palaeozoic Devonian crystalline limestones situated amidst non-karst rocks – phyllites. The entrance adit opens to cave spaces at 642 m above the sea level. Wedge upwards narrowing passages and halls were formed by corrosive activities of rainfall waters, which percolated along the distinct tectonic faults. Different shape have mainly horizontal passages and halls, which are located between tectonic faults. These originated mostly by corrosive activity of slowly flowing water in consequence of mixing waters of various temperatures and chemical composition, which is obvious by plentiful irregular niches and ceiling cupolas. Along the previous water table level, which later declined and stagnated for a long time, corrosive planated ceilings were formed (they cut out the lower parts of ceiling cupolas) and side corrosion notches on rocky walls.

Three generations of aragonite were determined in the cave. It is formed from water solutions with high content of Mg-, Fe- a Mn-ions under conditions of stabile microclimate. The oldest are milky translucent kidney-shaped formation and their corroded relics (dated age of 121- 138 thousand years) with partially recrystalized aragonite, in places metamorphosed to calcite. The second generation of aragonite prevails and occurs mostly in the form of several cm long needles and spiral helictites (dated age of 14 thousand years). These form cluster or dentritic formations (including so called cave flower or anthodite), which are most attractive for visitors. Aragonite of the second generation is still growing, by which it maintains the white colour and clean appearance. The youngest, contemporary generation of aragonite forms tiny fans with diameter of 2–4 mm (sometimes even more), sporadically creating miniature helictites with length not overlapping 40 mm.

Air temperature in the cave is between 7.2 and 7.8 ºC, relative humidity between 92 and 97 %. Stabilizing of the cave microclimate is caused by ochres that contain 47-56 volume percent of water and they are able to absorb and release water vapour.

The cave was discovered by chance by M.Cangár and J. Prošek, the employees of the East-Slovakian Ore Survey in Jelšava, while drilling the geological survey Kapusta Adit in 1954. The cave was inspected by the people from Turista national enterprise in 1955 and the first survey works took place in 1956. Cave development works for opening to the public started in 1966 by thirling the access adit 145 m long, which  enabled openin the cave to the public in 1972. The length of accessible part is 230 m.