The Harmanecká Cave ranks among the most important caves in Slovakia by remarkable origin of cave spaces, mighty breakdown domes, high abundance of moonmilk, as well as by the number of wintering bats. 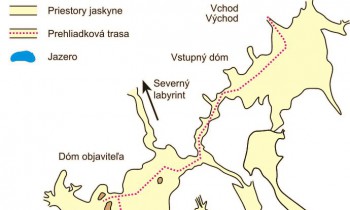 The cave entrance is on the northern side of the Kotolnica Hill at elevation of 821 m above sea level and above the bottom of the valley. A serpentine pathway ascends to the cave  260 m uphill and is 1,420m long.  The total length of the cave is 3,123 m, of which 1,020 m is the show path open for visitors. Air temperature in the cave ranges between 5,8°C and 6,4°C.

Underground passages and halls are formed in the Middle Triassic limestones.  The cave has a fissure-breakdown character. The fissures were widened by water activities and later were reshaped by collapses and crumbling of rocks, mainly in intersections of passages, where larger halls and domes originated. The above lying rock is formed of pure limestone thanks to which the cave gained a name the White Cave.

It is located in the valley of Harmanec to the northwest from Banská Bystrica, in the southern part of the Great Fatra Mts. Cave entrance is on the northern side of Kotolnica at elevation of 821 m, and 260 m above the bottom of the valley.

You will get to the Harmanecká Cave from the parking place at the state road Harmanec - Turčianske Teplice to the northwest from Banská Bystrica. Cave entrance, which is 260 m above is accessible by serpentine path. The ascent lasts 40 min. There are educational boards installed along the path.

It is formed in the Middle Triassic dark-grey Gutenstein limestones of the Choč Nappe along the tectonic faults with  locally applied interbed surfaces. It reaches the length of 3,123 m with vertical span of 75 m. Except for voluminous collapse spaces (Dome of Pagodas, Tall Dome, Stray Dome and others), there are horizontal and inclined passages with irregular oval shapes, however without typical signs of underground river modelling. We can also find distinct collapses and spiral abysses.

The initial cave spaces were formed by corrosion of slowly flowing and almost stagnant water, when they were completely flooded. Mixed corrosion and slow convection flow of water formed irregular sponge-like and oval cupola hollows. After the decline of water-table, which is witnessed by here and there preserved level notches, the cave spaces were flooded only partially. The time of forming the primary underground spaces is probably related to the ancient inflow of waters from the edge part of the Kremické Hills (extraneous sediments floated from non-karst area were found in the cave) and to forming of surrounding planation surface in the Tertiary Period. Later on, several distinct collapses of roofs and walls occurred in many places of the cave, by which the original oval shapes were destructed and remodelled, by which debris fields, debris cones, mounds and bulwarks were formed. Except for collapses, also percolating atmospheric waters contributed to further forming of the underground spaces. Narrow fissure passages and chimneys were formed by their corrosive activity in the cave.

The cave is known by abundant occurrence of white soft sinter – moonmilk. From among the sinter fills, mainly the mighty pagoda stalagmites, wall flowstone waterfalls and draperies catch your attention. There are two pagodas twelve meters high with three meters in diameter in the Great Dome. Air temperature in the cave is between 5.8 and 6.4 °C and relative humidity 94 to 97 %.

The cave belongs among the most important localities of bats occurrence in Slovakia. Eleven bat species were recorded in the cave by now. Dominating species are the Greater Mouse-Eared Bat (Myotis myotis) and Lesser Mouse-Eared Bat (Myotis blythii), which occurred here several times in amount of 1,000 to 1,500 individuals.  Another abundant bat species in this cave is the Common Pipistrelle (Pipistrellus pipistrellus). Frequently, we can find here also the Daubenton’s Bat (Myotis daubentonii). The most important from the invertebrates are the multipede Allorhiscosoma sphinx and crustacean Bathynella natans.

The entrance space of the cave called Izbica, which offered shelter in bad weather to woodcutters and forest workers, was known to local people since long ago. The later discovery of the cave in 1932 wasn’t a result of a chance but a goal-directed heavy work of 18 years old Michal Bacúrik, who after 14 day dug out a narrow opening – now the Discoverer’s Passage and entered the snow white hall later called the Discoverer’s Dome. It is interesting that the discoverer was fined for this because he didn’t have the permission from the town forest office to enter their forests. The town council in Banská Bystrica closed the cave in 1933 because of flowstone fill protection. The Dome of Pagodas, Riverbed and Stray Dome were discovered by V. Kovalčík, O. Ondroušek in 1938. In 1944 during the World War II, the cave served as a shelter for local people.

The cave was measured in 1949 on the impulse of the caving group of the Club of Slovak Tourists and Skiers from Banská Bystrica, which was related to planned opening to the public. The cave was opened to the public for the first time in 1950.

The people from Turista National Enterprise penetrated to spaces behind the Stray Dome in 1959. Further continuation of spaces was discovered by the cavers from regional group of SSS in Banská Bystrica in 1987. The length of accessible part is 720 m.