Ice gem of the world heritage

Dobšinská ice cave belongs among the most important ice caves in the world. Since 2000 it is inscribed on the world heritage list. As compared with known high-mountain ice caves Eisriesenwelt and Dachstein-Rieseneishöhle in Austrian Alps or with the Romanian Scărişoara Cave in Bihor Mts., which has the glaciated part at elevations of 1,100 to 1,120 m n. m., the monumental glaciation of the Dobšinská Ice Cave persist for thousands of years at elevations only 920 to 950 m. 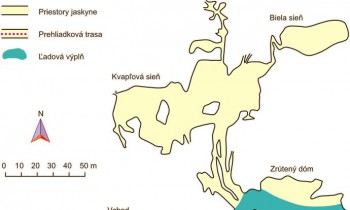 The entrance to the cave is on the northern slope of the Duča Hill at elevation of 969,5 m, cave length is 1,483 m. Duration of visit: 515 m. Cave spaces go down from the beginning, which togheter with northern orientation enables the descent of cold air and overall cooling of the cave.

The cave has several magnificent parts – Great and Small Halls, Ruffiny’s Corridor and Collapsed Dome. The parts without ice have names Dripstone and White Hall, Dry Dome, Dripstone Cellar and Hell. Air temperature in the Great Hall is from -3,8 to + 0,5 C. The visitors descend only several tens meters underground and find themselves in an ice kingdom of cold and perfect products of the mother Nature.

One of the interesting facts on the cave is that up to the  1946 a skating for public was permitted all year round. The well known Czechoslovak figure skater Karol Divín and a company of military speed skaters trained here in the fifties.

The cave is located on the south-western edge of the Slovak Paradise National Park in the Spiš-Gemer karst. Cave entrance is on the northern slope of the Duča Hill at elevation of 969 m, 130 m above the bottom of the Hnilec Valley.

You can get to cave from the Dobšinská ľadová jaskyňa settlement in the Slovak Paradise between Poprad and Rožňava. There are educational boards along the access tour to the cave, which is about 1 km long. It is necessary to overcome 130 m of vertical distance between parking place and cave entrance. The ascent lasts 25 min.

Dobšinská Ice Cave is a part of the Stratená Cave System. It is formed in the Middle Triassic pale Steinalm and Wetterstein limestones of the Stratená Nappe, along the tectonic faults and interbed surfaces.  The cave reaches the length of 1,491 m and vertical span of 75 m.

The main part of the cave is represented by a giant cavity descending from the entrance to the depth of 70 m, which was formed by breakdown of rock columns between the passages formed by ponor palaeoflow of Hnilec in several development levels. At present, the most of its volume is filled with glacier, sometimes up to the ceiling, by which it is divided into individual parts (Great and Small Hall, Ruffiny’s Corridor and Ground Floor). Collapsed Dome (Zrútený dóm) is partly glaciated, and its edge reaches as far as under the Duča breakdown. Original oval shapes of river modelling are almost entirely destructed by collapses and frost weathering.

Conditions for glaciation arose probably in the middle Quaternary period after the breakdown of ceilings between the Dobšinská Ice Cave and Stratenská Cave, by which the cave obtained sack-like character with stagnation of cold air that penetrated into the cave through the upper opening formed by collapse of the ceiling part (present entrance to cave). Freezing the percolating rainfall waters caused glaciation of the underground space. The beginnings of ice formation go back to the Riss ice age (approx. 300- to 140-thousand years ago), or until the end of the Mindel ice age.

Ice fill occurs in the form of floor ice, icefalls, ice stalagmites and columns. Glaciated surface has 9,772 m2, ice volume reaches 110,100 m3. The highest thickness of ice is in the Great Hall with 26,5 m. The floor ice is characterized by its stratification. The decrease of ice takes place by melting on the contact with the bedrock. Continuous replacement of the underground glacier supposedly takes around 1,700 up to 2,000 years. The ice is slowly moving from the entrance, Small and Great Hall towards the Ground Floor and Ruffiny’s Corridor (2 to 4 cm a year). The Dobšinská Ice Cave belongs among the most significant ice caves in the world, which is accentuated by its location outside the Alps high-mountain region (underground ice is at elevation of 920 to 950 m n. m.).

Average annual temperature of air in the glaciated Great Hall reaches –0,4 to –1,0 °C (in February –2,7 to –3,9 °C, in August around +0,2 °C). The temperature in the bottom parts of the cave remains under the freezing point all the year round. Relative air humidity in non-glaciated parts is mostly 75 to 90 %, sometimes over 90 %. Air temperature in the non-glaciated parts of the cave fluctuates between +0.8 and +3.5 °C, relative humidity between 85 and 98 %.  The cave is of static-dynamic character and different winter and summer regime of air flow circulation. In winter the cold air flows underground and in summer vice versa.

The cave stands for the most important wintering place of the Whiskered Bat (Myotis mystacinus) and Brandt’s Bat (Myotis brandtii) in the central Europe. From among 12 species that were found in the cave important is the occurrence of the Pond Bat (Myotis dasycneme) and Natterer’s Bat (Myotis nattereri), which belong among the rarest bat species in Slovakia.

Opening to the cave called “ice hole” was known since long time ago. However, it was only E. Ruffíni accompanied by G. Lang, A. Mega and F. Fehér who descended underground in 1870. Thanks to the Dobšiná town, the cave was opened for the public as early as 1871. Experiments with electric lighting began in 1881. Regular electric lighting was introduced in 1887. The cave belongs among the first electrically illuminated caves in the world. Immediately after the discovery the cave took attention of both experts and public and many of that time personalities visited the cave – P. O. Hviezdoslav, S. H. Vajanský and others. A concert was held in the Great Hall in 1890 to the tribute of Karl Ludwig von Habsburg. It was known also by summer skating, which took place for the first time in 1893. J. Mišelnický discovered the Dripstone Hall, J. Ogurčák the Northern Corridor and L. Šimkovič the White Hall in 1947. During 1953 – 1954 a general repair of the show path and electric lighting was done as well as protection measures after the discovery of non-glaciated parts. Public has access to 475 m with elevation range of -43 m.

Tunnel end under the Great Curtain

Tunnel under the Great Curtain