"Due to previous weak winters we recorded a massive decrease of ice volume in the cave. Decrements of ice in summer during the last more than 10 years are much higher than increments in winter. Facing the global warming effect, the cave dropped to a minimum of ice fill within probably the last 70 years. Nevertheless, there is still ice in the central - “heart” part of the cave, but only a floor one. Vertical ice forms cannot be found in the cave at present. You can still admire them in pictures in our souvenir shop. We keep hoping that better times will come and that we are not the ones of those last people to see the ice in the cave." 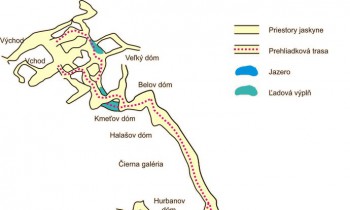 NO RESERVATIONS OF ADMISSIONS ARE PROVIDED.

The show path is 650 m long with vertical span of 48 m, however the visitors will pass through 800 m. The entrance and exit are at the same elevation, only  40 m away one from the other. The stay in cave lasts about 45 min. The temperature during summer months fluctuates between +0,4°C and +3°C.

The show path goes through mighty river passages interconnected by steep sections. The first part of the tour leads through cave spaces with flowstone decoration and the second part is in the iced spaces of the cave.

The combination of flowstone and ice decoration offers a very interesting tour for visitors, where they can learn on forming cave spaces, cave decoration and conditions for glaciation and also on the influence of ice on original calcite fill. The cave spaces consist of oval, river modelled passages and domes reshaped by collapses and frost weathering.

The cave is located 10 km southerly from the city of Liptovský Mikuláš, in the Low Tatras Mts., on the right side of the Demänovská Valley, several kilometers below the known skiing resort Jasná. The entrance building is visible from the parking place some 90 m above the bottom of the valley. A serpent path leads upwards, past the Kamenná chata restaurant by a forest road (600 m) with boards of the educational trail with two resting places. The ascent to cave takes approximately 20 min.

The length of measured spaces is 2,445 m with vertical distance of 57 m. The cave spaces of three developmental levels consist of oval, river modelled passages with ceiling and side channels (Black Gallery, Lake Pasage, Bear’s Passage) and domes reshaped by collapses and frost weathering (Gravel Dome, Great Dome, Kmeť’s Dome, Bel’s Dome, Halaš’ Dome, Dome of Ruins). The passages descend from the entrance to the depth of 40 to 50 m.

Ice fill occurs in the lower parts of the cave, mainly in the Kmeť’s Dome. There is floor ice, ice columns, stalactites and stalagmites. The conditions for glaciation started after burying several openings to the surface in consequence of slope modeling processes, by which the air replacement was restricted. Heavier cold air is kept in the lower parts of the cave. Seeping precipitation water freezes in overcooled underground spaces. Air temperature in glaciated parts fluctuates around 0 °C and in direction to the back non-glaciated parts rises from 1.3 up to 5.7 °C. Relative air humidity is between 92 and 98 %.

Original flowstone fill was preserved in several places of the cave (stalactites, stalagmites, sinter covers on the walls, floor crusts and other forms), which is, however, considerably destroyed by frost weathering in the glaciated part of the cave. Sinter formations are coloured on the surface into gray up to black from soot of tar torches, oil burners and paraffin lamps, which were used for lighting until 1924. This phenomenon, in the case of the Demänovská Ice Cave, can be considered more or less a cultural one, connected with its rich history.

The cave belongs among long known finding places of bones of various vertebrates including the cave bear (Ursus spelaeus), which were in the first half of the 18th century considered dragons’ bones. That’s why the cave was called Dragon’s Cave in the past. By now, eight bat species were found in its underground spaces. It represents the most important wintering place of the Northern Bat (Eptesicus nilssonii) and the second most important one of the Whiskered/Brandt’s Bat (Myotis mystacinus/Myotis brandtii) in Slovakia. Species representation of tiny cave fauna – invertebrates is substantially smaller in glaciated parts as compared with non-glaciated ones.

It is passed on that the Demänovská Ice Cave is known from time immemorial. The first mention about the openings to caves in the Demänovská Valley is recorded in the Esztergom Chapter document from 1299. However, it cannot be related to a specific cave. The first written mention about the Demänovská Ice Cave is related to the description of a cave not far from Liptovský Mikuláš and comes from 1672 by J. P. Hain who was interested in cave bear bones and took them for dragon’s bones.

Further mentions of the Demänovská Ice Cave are connected with G. Buchholtz jr., who surveyed its spaces in 1719. He sent the description together with a sketch of the cave to M. Bel, who published them in 1723.

Emperor’s commission, which were surveying Tatras and adjacent mountains overlooked the cave in 1751. Plenty inscriptions on cave walls and preserved rich literature show a great interest of then scientific circles and general public in the cave. There are also signatures of important persons of the Slovak history on its walls (M. M. Hodža, S. Chalupka, G. Fejérpataky-Belopotocký and others).

The primary opening the cave for public took place around the half of the 19th century, though an adaptation of its spaces to make descend easier mainly in the steep and iced entrance part was done earlier thanks to the Demänová Association of Owners (composesorate). Further adjustments in the cave were carried out by the Liptov’s Section of the Ugrian Carpathian Club, which built the first hostel under the cave in 1885 and began to take care of the development of tourism in the Demänovská Valley. A. Žuffa jr. discovered the Dome of Ruins in the lower part of the cave in 1909. The interest in the Demänovská Ice Cave was gradually falling down after opening the Demänovská Cave of Liberty for the public in 1924. A. Král together with V. Benický, discovered the upper dripstone parts of the cave in 1926.

The cave was reopened in 1950 – 1952, including installation of electric lighting. S. Šrol, P. Revaj and P. Droppa discovered the Demänovská Cave of Peace from the Lake Passage in January 1952. This had disturbed the temperature regime in the cave, so in 1953 – 1954 measures were taken to restore the ice fill (closing the dug opening in the Dome of Ruins, building a wall to divide parts with and without ice etc.). The show path was reconstructed through the years 1974 – 1976 and Gravel Dome was opened for the public. The cavers of the Demänovská Valley local group – a unit of the Slovak Speleological Society discovered the spaces above the Kmeť’s Dome in 1983. The cave has 650 m open for public with elevation difference of -48 m.